Written by Alexandra Donald on February 23, 2016. Posted in news

NewBliss is getting its first international performance on Friday 4th March in Bozar Theatre in Brussels. I am very grateful to the Arts Council of Northern Ireland for the support. See the below flyer for more details. 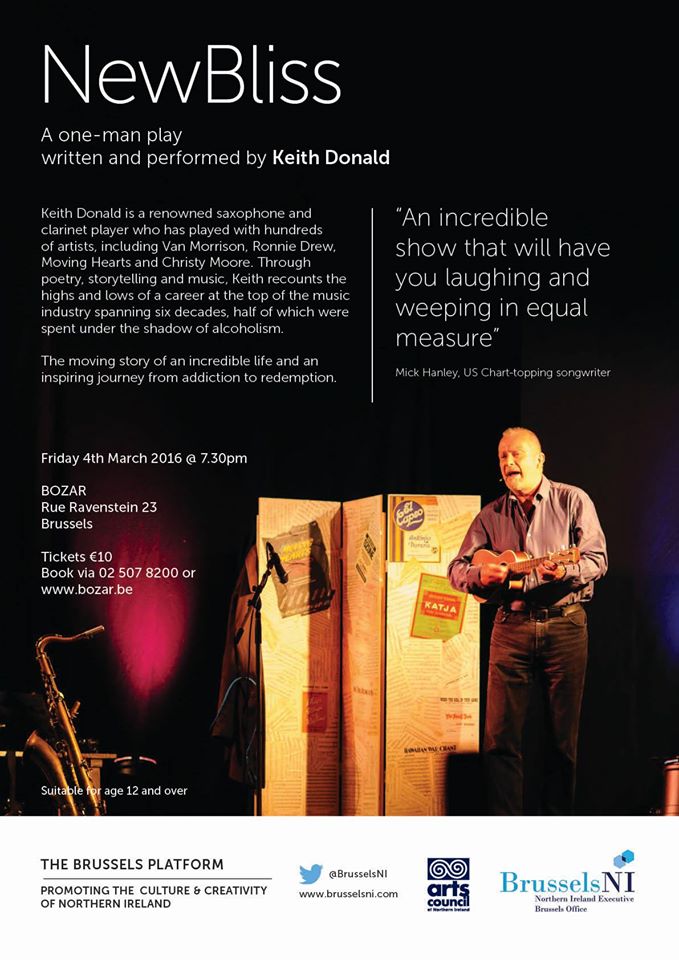 Friday 3rd May in The Sunflower. Jazz with Louis Stewart and Neil Loghlen.

Jazz at the Sunflower, Belfast

The Sunflower is a new bar on the corner of Union Street and Kent Street in Belfast. It’s just off Royal Avenue behind the Central Library. We’re hosting a jazz gig there on the first Friday of every month. So far I’ve played with Carmel McCreagh, Fiachra Trench on keys, Joe Csibi on bass, Steve Hogan on drums, Honor Heffernan and Jim Doherty on piano. On 3rd May Louis Stewart and Neil Loghlen on bass join me.

Friday and Saturday 27th and 28th July at The Village, County Kildare. Father and daughter: six sets with Alex Donald on decks and me on soprano sax.

Wednesday 22nd August. Clarinet and stories: solo gig for the Moyle Group of Amnesty International in Thyme & Co, Ballycastle in the Glens of Antrim. Doors at 7.30, booking advisable at venue.

Friday 21st September. Again with Carmel and Fiachra at the Mermaid Arts Centre, Bray as part of Culture Night. Booking at www.mermaidartscentre.ie

This week’s *Most Active Indies chart in Canada has at Number One the new song, Working at Christmas, performed by Paul Brady and Terri Clark, written by Keith Donald, Ralph Murphy and Paul Brady.

*Most Active Indies are the most streamed and downloaded Singles in the given period on releases not directly promoted by any of the four “major” record labels.

You can listen to the track below.